skip to main | skip to sidebar

You Are What You Eat

How to Tell Genetically-Modified Foods by the Label 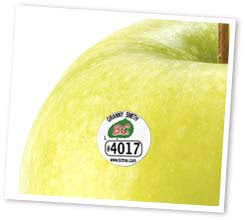 For years I thought (and was told) that there is no way to tell if a piece of produce in a grocery store was genetically modified or not. In the U.S., there is no regulation specifying that food retailers disclose whether food DNA has been tampered with.

Well, I was wrong. You can tell if a piece of produce is GM by looking at the "product look-up" (PLU) code on the little label.

According to Dr. Joseph Mercola, physician and activist, you can determine the following by looking at the label:


Of course, buying certified organic food means that it is, by definition, not GM. And these days, it's safe to say that if it's not organic, it is probably GM. Dr. Mercola says that 7 out of 10 items in a conventional produce department are GM.

NOTE: Whole Foods Market prides themselves on carrying *ZERO* GM foods in their entire store. They say that no ingredient in any product has a GM source. In Columbus, Ohio, we're lucky to have a Whole Foods Market very close to where we live. Yes, you could doubt Whole Foods claim, butmy previous posting on this blog explains what I think is the flaw in that logic.

If you're on the fence with GM foods, read this study or this one. Rats fed a diet of GM corn developed smaller kidneys and had blood abnormalities. The study was conducted by Monsanto, a GM food manufacturer, but when they saw the results they tried to hush the researchers. Unfortunately for Monsanto, fortunately for us, the information got out anyway.
Posted by Tebby Chiropractic and Sports Medicine Clinic at 12:45 PM 18 comments: