skip to main | skip to sidebar

Come join Dr. West for Neckercize and Backercize held at the clinic under her direction. Sign up in the clinic, space is limited and insurance may cover the cost of the classes! 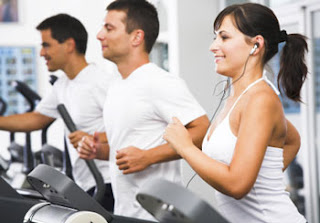 “Physical fitness appeared to have a greater impact on certain metabolic risk factors than body fat. Being fit correlated with lower triglycerides and higher HDL ... healthy cholesterol in women and lower blood glucose levels in men.”

Even though more Americans are exercising, rates of obesity and smoking have not changed.  A survey by the U.S. Centers for Disease Control and Prevention found that obesity rates remained at around 28 percent of adults, the same as in 2008.
However, 34.7 percent claimed that they engaged in regular leisure physical activity, up from 31.9 percent in 2008.
Reuters reports:

“Health experts and the U.S. government both recommend getting daily exercise -- about an hour a day of moderate exercise for most adults -- to keep weight off and prevent heart disease, diabetes and cancer.”

Posted by: Dr. Mercola | July 08 2010
Posted by Tebby Chiropractic and Sports Medicine Clinic at 3:09 AM